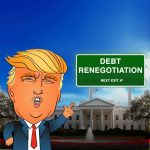 During a lengthy interview on CNBC the week before last, Donald Trump, fresh from becoming the presumptive Republican nominee, came as close as any major presidential contender ever has to saying that America is not capable of repaying her debts in full, and that our path to economic recovery might involve some pain for our creditors. This moment of candor earned Trump almost as much condemnation as his earlier suggestions to ban Muslims from entering the United States.

To many, the idea that U.S. debt obligations involved even the slightest risks to investors was both the height of financial naiveté and the epitome of political recklessness. The pressure was so great in fact that The Donald, who has consistently refused to engage in even the most sensible strategic retreats, appeared on CNN last Monday to “clarify” his earlier remarks. However, he ignited another firestorm when he inadvertently let slip another unspoken truth, namely, that the United States can always print however much money she needs to “repay” her debt. Apparently the only acceptable position to hold on this issue is to completely deny reality.

Despite his public image as a premiere pitchman, marketeer, and builder of glitzy gold towers, Donald Trump owes his business success to his ability to walk into a roomful of people to whom he owes money and, through the use of threats, bluster, and hardball negotiations, convince them to accept less than what he owes. Time and again he has used competitors’ prior lending mistakes as a lever to get what he wants. That’s why he has said repeatedly that he is “the king of debt.” Evidently he thought that this private experience and common sense could help in the counterintuitive arena of public debt.

Prior to Trump’s “clarification,” Jordan Weissmann of the online news site Slate stated the case succinctly, “When a country prints its own currency, markets don’t typically worry about them running out of money, and thus are willing to lend freely. …The fact that the U.S. controls its own currency does give us flexibility when it comes to debt. If it weren’t for our farcical, self-imposed debt ceiling, default would rarely, if ever, be something people seriously discussed.” (5/9/16)

It seems to me that Slate was arguing that Trump doesn’t really understand that we print our own money at will. There may be a great many things of which Trump is unaware, but he clearly knows where our money comes from. The difference between Trump and his critics is that he must believe there is a cost in printing too much money. Modern economists do not appear to grasp this basic concept.

New York Times columnist Paul Krugman went even further. Despite the fact that he has argued that the Federal Reserve should print an unlimited supply of dollars to keep the economy afloat, he believes that the greenbacks themselves will remain precious and coveted forever, as long as reckless demagogues like Trump don’t spoil the party. In his column on May 9, entitled “The Making of an Ignoramus” (which responded specifically to Trump’s CNBC interview), Krugman said that Trump’s default suggestion would, “among other things, deprive the world economy of its most crucial safe asset, U.S. debt, at a time when safe assets are already in short supply.”

That same day, during an interview with Jake Tapper on The Lead on CNN, conservative economist Douglas Holtz-Eakin, former director of the Congressional Budget Office (CBO), warned that if Trump, as president, ordered the Federal Reserve to print money to buy debt, it would “break the independence of the Fed” and undermine a Federal Reserve System that “has been the foundation of our economic success.” I would ask Mr. Holtz-Eakin what exactly he believed happened with Quantitative Easing or operation twist, multi-trillion dollar programs in which the Fed purchased trillions of U.S. government bonds? Is he okay with that simply because there was no executive order compelling it? Does he expect that during the next economic downturn an “independent” Fed may refuse to buy government debt, thereby forcing the government to make unpopular budget cuts, raise taxes, or default? What planet does he live on? Perhaps it’s the earth in a parallel universe where the Fed was actually the “foundation of our economic success” rather than merely a perpetual bubble blower. Any success we have managed to achieve after the founding of the Federal Reserve in 1913 has been despite the Fed, not because of it.

At least some of the countless articles that have appeared on the Trump debt ideas have begrudgingly admitted that there is a potential downside to printing money as the only solution to debt management, in that it could spark inflation that passes from the “good” range of 2-4% to the “bad” range of 5% or more. In addition to the hardships that this could create for consumers, especially at the lower end of the economic spectrum, they also admit that higher inflation would constitute a “haircut” for the bondholders themselves, as they will be repaid with dollars of lesser value than those that they lent. In other words, partial defaults are possible through above the table negotiations (such as those Trump hinted at) or the backdoor channel of inflation. But they almost universally agree that the covert losses through higher inflation is the far, far better scenario than the global financial meltdown that they believe would result from an overt restructuring of U.S. debt. Or as Krugman argues in his “Ignoramus” article, “One does not casually suggest throwing away America’s carefully cultivated reputation as the world’s most scrupulous debtor…”. In Krugman’s world, “scruples” must involve never admitting the truth.

I believe the opposite. Given the proven failure of debt-fueled policies to spark real growth and the monetary quagmire that will swallow us just as surely as it has swallowed Japan, a partial debt default would allow the United States to honestly deal with the mistakes of the past, break the cycle of never-ending debt, and set the stage for an actual economic recovery. Just as companies can be resurrected through the bankruptcy process, so too can a nation. Of course, this would involve a great deal of pain in the short term, both for creditors and citizens. But breaking an addiction is never easy. We are addicted to borrowing, and our creditors are addicted to pretending we can repay in full. We would all be better off if we dispel that illusion.

However, Trump clearly went off the rails, even in my book, when he suggested that the United States could repurchase our outstanding debt at a discount if interest rates were to rise. On this point he drifted into pure fantasy.

In his corporate career, Trump is well familiar with the technique of buying out creditors at a discount. If, for instance, a lender buys a 10-year corporate bond at a 3% rate from a company when interest rates are relatively low. If interest rates were to rise generally, the bondholder may not be happy with such a position if he knew that he could buy a 6% 10-year bond from a similar company. At that point the bondholder may be happy to resell his 3% bond back to the issuer at a discount, just so he could free up cash to get those higher rates. Similarly, the corporation may benefit from simplifying its balance sheet and retiring outstanding debt.

But this scenario requires fresh cash to make the purchases. Corporations can cut into profits to find the cash, or take an infusion from new investors. But the United States has essentially no reserves from which to draw upon; we already have debt of nearly $20 trillion and, as of now, we will run massive deficits every year for the foreseeable future. The only way we could get the money to retire old debt is to issue new debt. But since such a scenario would, by definition, occur in a higher interest rate environment, there would be no benefit.

Of course, Trump also overlooks the fact that a large portion of Treasury debt held by the public is short-term. There would be no need for holders of short-term debt to sell at a steep discount when they can just hold to maturity and in theory be repaid in full. Thanks to QE and Operation Twist, the lion’s share of the Fed’s assets are longer-dated securities. But even if Trump could raise taxes or cut spending to generate the funds necessary to buy back Treasuries held by the Fed at a discount, the Fed’s losses would be invoiced to the Treasury for reimbursement. So what we gain with our right hand would be surrendered by our left.

But Trump’s biggest oversight is that when interest rates do rise, which would be the only environment where Treasuries would trade at a discount, the U.S. budget deficit would already be soaring. That is because not only could such an increase in rates help push the economy into a recession, if we were not already in one, but all of that low-yielding short-term debt would be maturing into a higher rate environment. So with the cost of rolling over our existing debts soaring, requiring tax hikes, spending cuts, or additional borrowing at higher rates, where would we possibly come up with the extra money to pay off principal, even if we could do so at a discount?

But even with these inconsistent musings, Trump acknowledged a hint of realism that other politicians can’t. He said that the U.S. economy remains extremely dependent on ultra-low interest rates, and that even a 1% increase in rates could make our budget position untenable. But Trump’s policy ideas on expanding the military and shoring up social security, taking better care of our vets, building walls, rounding up and deporting illegals, and replacing Obamacare with some as yet undefined program, will require even more borrowing. To square that budgetary circle, Trump acknowledged that we have to push down the value of the dollar.

In the CNBC interview, he said that a strong dollar sounds good “on paper” but that a weak currency offers much greater benefits. In fact, he credits weak currencies as the primary weapon used by China to engineer its own success. He wants to do the same for America. Of course the Achilles heel of such a plan is that a significantly weaker dollar is bound to usher in a wave of inflation that could rival, or even surpass, the 1970s. If Trump is willing to let the dollar fall steeply, the poor especially could suffer as purchasing power evaporates and poverty rates increase.

But based on the opinions of economists, that is exactly the policy path for which we should prepare. Inflation and a weak dollar are the only solutions they can envision to “solve” our problems, and that is exactly what we will get. So nice try Donald, but from now on you may as well just keep talking about the Wall.