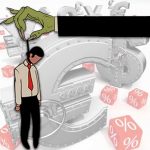 If the Economy were a car, productivity would be the engine. Heated seats, on-demand 4-wheel drive and light-sensitive tinted windshields, are all very nice. But they mean little if the engine doesn’t turn and the car just sits in the driveway. The latest productivity data from the Commerce Department confirms that our economic engine is sputtering.

If you strip away all the bells and whistles of economic analysis, the simple truth is that the increased living standards that have taken us from the stone age to the digital age happened because we increased our productivity. Better plows, windmills, bulldozers, factories and, more recently, better software, technology and automation, have allowed economies to produce more output with less human effort. This means there are more goods and services for more people to share and workers can work less to acquire those goodies. When productivity stops increasing, no amount of financial gimmickry can compensate.

With this in mind the latest batch of productivity data should have significantly changed the conversation. But like other pieces of evidence that point to a weakening economy, the news made scarcely a ripple. The fact that few opinions about our economic health changed as a result, confirms just how big our blinders have become.

Most of the economic prognosticators were fairly confident about the Second Quarter numbers. After all, productivity had unexpectedly declined for the prior two quarters, and given the optimism that is ingrained on Wall Street and Washington, a big snap back was expected. The consensus was for an increase of .5%. Instead we got a .5% contraction. That’s a huge miss. The contraction resulted in three consecutive declines, something that hasn’t happened since the late 1970’s, an era often referred to as the “Malaise Days” of the Carter presidency. That time, which spawned such concepts as “stagflation” and “the misery index,” was widely regarded as one of the low points of U.S. economic history. Well, break out your roller disco skates, everything old is new again.

But it gets worse. Productivity declined by .4% from a year earlier, marking the first annual decline in three years. According to data from the Bureau of Labor Statistics, the total magnitude of the three quarter drop was the largest decline in productivity since 1993. The last three quarters mark a significant decline from the already abysmal productivity growth we have since the Financial Crisis of 2008. According to the Wall Street Journal, during the 8 years between 2007 and 2015 productivity growth averaged just 1.3% annually, which was less than half the pace that was seen in the seven year period between 2000 and 2007.

The talking heads on TV can’t seem to offer any real reason why productivity has gone missing. Some feebly suggest that globalization is the problem, or that automation has moved so fast that the benefits usually offered by technological improvements have lost their power. But it would be hard to come up with a reason why trade, which has universally benefited local, regional, and international economies through comparative advantage and specialization, has suddenly become a problem. Similarly, when does greater efficiency become a problem rather than a solution? So they are stumped.

But these economists ignore the major change that has befallen the world over the last eight years, a change that has coincided neatly with the global collapse in productivity. The Financial Crisis of 2008 ushered in an age of central bank activism the likes of which we have never before seen. All the worlds’ leading central banks, most notably the Federal Reserve in Washington, have unleashed ever bolder experiments in monetary stimulus designed to reflate financial markets, push up asset prices, stimulate demand, and create economic growth. And while there is little evidence that these policies have produced any of the promised benefits, there is every reason to believe that the scale of these experiments will just get larger if the global economy doesn’t improve.

But very few brain cells have been expended about the unintended consequences that these policies may be creating. But let’s be clear, there is nothing natural or logical about a set of policies that result in an “investor” paying a borrower for the privilege of lending them money. So in this strange new world, we should expect some collateral damage. Productivity is a primary casualty. Here’s why.

Another set of statistics that has accompanied the decline in productivity is the severe multi-year drop in business investment and spending. Traditionally, businesses have set aside good chunks of their profits to invest in new plant and equipment, research and development, worker training, and other investments that could lead to the breakthroughs and better business practices. The investments can lead to greater productivity.

But the business investment numbers have been dismal. But it’s not because corporate profits are down. They aren’t. Companies have the cash, they just aren’t using it to invest in the future. Instead they are following the money provided by the central banks.

Ultra low interest rates have encouraged businesses to borrow money to spend on share buybacks, debt refinancing, and dividends. They have also encouraged financial speculation in the stock market, the bond market, and in real estate. Investors may believe that central bankers will not allow any of those markets to fall as such declines could tip the already teetering global economies into recession. The Fed, the Bank of England, the Bank of Japan, and the European Central Bank have already telegraphed that they will be the lenders and buyers of last resort. These commitments have turned many investments into “no lose” propositions. Why take a chance on R&D when you can buy a risk free bond?

Higher interest rates are actually healthy for an economy. They encourage real savings, with lenders actually concerned about the safety of their loans. Without the backstop of central banks, speculators could not out bid legitimate borrowers who make capital investments that produce real returns. But with central banks conjuring cheap credit out of thin air, supplanting the normal market-based credit allocation process; the result is speculative asset bubbles, decreasing productivity, anemic growth, and falling real wages. Welcome to the new normal.

If the cost of money is high, people think carefully about where they want to put their money. They select only the best investments. This helps everyone. When money is cheap, they throw darts against a wall. This is not the best use of societies’ scarce resources. Is it any wonder productivity is down?

Many economists are now saying that the Fed won’t be able to raise rates until productivity improves. But productivity will never improve as long as rates stay this low. This is the paradox of the of the new economy.

When will central bankers conclude that it’s their own medicine that is actually making the economy sick? They will not make that connection until they succeed in killing the patient…and even then they may continue to administer the same toxic medicine to a corpse. The political pressure is just too great to ever admit their mistakes, so they repeat them indefinitely.