THE RISE OF THE BARTER ECONOMY 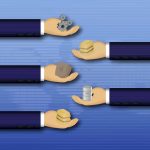 Imagine a day when you go to buy a quart of milk, ask the price, and the cashier says, “that’ll be a tenth ounce silver.” As the US dollar’s decline accelerates, several efforts around the country are trying to make this vision a reality.

Historically, paying for items in silver or gold was actually quite common. We happen to live in an unusual time and place where generations have grown up trading exclusively in paper. While my parents still used dimes made of silver, we have now gone several decades with no precious metals in any of our official coinage. But this system of money by government fiat is unsustainable.

While the practice of bartering precious metals directly for goods and services has continued on a small-scale over the last few decades, the 2000s saw the beginning of organized efforts to revive gold and silver as money.

One such effort was spearheaded by an eccentric mintmaster from Hawaii named Bernard Von Nothaus. He called his project the Liberty Dollar, and it centered on privately minted gold and silver rounds as well as deposit certificates for precious metals held in his firm’s vaults.

I had many reservations about how the project was implemented – coins were minted with a fixed US dollar amount at which they were supposed to circulate, the dollar amount was well above the spot price of the metal, and authorized “distributors” were allowed to pocket the difference (which often resulted in buyers paying far higher prices for their gold than what they would have paid had they simply bought, say, Canadian Maple Leafs instead) – but I believe Nothaus’ idea was a good one, even if the product was over-priced. Tellingly, despite the obvious flaws, public participation grew steadily from 1998 until 2007, when federal agents raided the Liberty Dollar’s offices on trumped-up charges of counterfeiting.

Really, they were charging him with competing with the US dollar’s monopoly privileges by offering a better product. It’s important to note that the case against Nothaus was built around his coins looking similar to official US coinage (though no one actually mistook Liberty Dollars for US currency), and not around encouraging people to use precious metals as circulating money.

Next came a crop of internet-based currencies backed by gold and silver. Most prominent among them are eGold and GoldMoney. Both were designed to allow customers to open online accounts that were valued in, and backed by, gold and silver bullion.

eGold was perhaps the better known of the two until it, too, was shut down by the US government on charges of money laundering. eGold was positioned more as an online payment system than a means of holding bullion. Due to the anonymous nature of the transactions – it was akin to spending cash – the authorities alleged that it was being used by criminal enterprises to funnel illegal funds. But mostly it was being used by regular people to begin saving and trading in money that holds its value. eGold had a transparent system of annual audits and live transaction screening by any user to keep the system honest. It, too, was growing robustly, and was putting up strong competition against PayPal until the authorities intervened.

GoldMoney, founded by my friend James Turk, has remained in operation by keeping its principal operations overseas and by cooperating fully with onerous US financial regulations. It offers similar services to eGold, but with an emphasis on long-term storage. GoldMoney improves upon traditional storage by locating offshore, offering real-time online account access, and providing extra liquidity. These services do come at a cost, however. Still, over the course of the last decade, GoldMoney has swelled to over $2 billion in assets. Clearly, many people want to trade gold and silver over US dollars.

Digital gold is a niche service, but I think the public’s rapid embrace of these projects – none older than ten years – shows that investors are viewing gold and silver as more than mere commodities, but once again seeing them as money. This could signal a paradigm shift back to tradition, which is good news for any precious metals holder.

While digital currencies are neat, in practical terms, nothing beats the resilience of traditional barter of bullion for goods and services. If you actually own the physical gold and silver that you intend to save or trade, then you can be sure it will be there until you’re ready to sell. You don’t have to trust anyone except yourself.

In that vein, several efforts have popped up around the country to simply get people trading gold and silver rather than dollars. Since the transactions involved are usually small, such as buying lunch at a local diner, silver is typically the metal of choice.

There are several hotspots for this sort of activity.

Philadelphia has one group, DelValley Silver, that has fostered a local barter market there by encouraging merchants to accept silver coins in addition to dollars. DelValley is also a silver dealer, but they sell privately minted rounds, which can be harder to liquidate than well-known coins like the American Gold Eagle and Canadian Maple Leaf.

Meanwhile, in New Hampshire, many merchants associated with the Free State Project have begun accepting gold and silver at their businesses. Innovation abounds here and the practice of encasing small amounts of silver in laminated cards seems to be the most successful.

Shire Silver encloses silver and gold wire in their cards and measures them in terms of grams. It’s much easier to trade a flat, plastic card containing a gram of silver than to carry around a 1 oz coin. However, even their website will admit that the premium on such a small amount of silver makes it less than ideal for investment purposes. Of course, when you’re ready to barter, they’ll be happy to take your 1 oz rounds in return for some Shire Silver. And that Shire Silver is being accepted by more and more merchants across New Hampshire and beyond.

Another variation, from a group based in Phoenix, Arizona, encloses a pre-1965 US dime inside the laminated card. Before ’65, every dime contained 90% silver, making them worth about $2.50 each in today’s debased dollars. That’s why you won’t find any pre-’65 dimes in your change from the grocery store. However, one fellow had the clever idea of putting them in these cards so they could trade at their silver value without getting mixed in with the worthless dimes we carry around today. The same group even created a free iPhone app that translates US dollar prices into various amounts of silver (more info here).

While I’ll still be selling regular old bullion coins and bars at Euro Pacific Precious Metals, because these are the best way to invest in physical precious metals, I am energized by these efforts. The great thing about holding and bartering physical precious metals is that there is no central company running the operations, like with the digital gold currencies, and therefore there’s no single person the government can go after.

(My new offshore bank, Euro Pacific Bank, Ltd., will soon be offering Visa-branded debit cards back by individual holdings of gold or silver. Euro Pacific Bank customers will be able to purchase gold from the bank, have it stored, and then access their holdings directly using their Visa cards to either make purchases though merchants or withdraw cash from banks and ATMs. Unfortunately, due to the reasons described above, I cannot offer this service to US customers. For more information about my offshore brokerage and banking companies, please visit www.europacintl.com.)

THE WRITING IS ON THE WALL

Besides these grassroots efforts at building barter communities, I’m seeing a cultural shift in favor of precious metals. Utah recently passed a law establishing gold and silver as legal tender and abolishing state capital gains taxes on their appreciation. I was interviewed for a new animated film called Silver Circle that features a rebel group in the near future which mints silver coins in defiance of an even more aggressive Federal Reserve. More and more people are starting to watch the gold price as often as they watch the Dow.
Overall, this bodes well for our investments and for our country. If gold and silver are successf