Speak Loudly And Carry No Stick 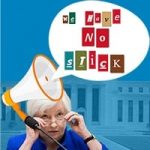 Theodore Roosevelt’s famous mantra “speak softly and carry a big stick” suggested that the United States should seek to avoid creating controversies and expectations through loose or rash pronouncements, but be prepared to act decisively, with the most powerful weaponry, when the time came. More than a century later, the Federal Reserve has stood Teddy’s maxim on its head. As far as Janet Yellen and her colleagues at the Fed are concerned, the Fed should speak as loudly, frequently, and as circularly as possible to conceal that they are holding no stick whatsoever.

Roosevelt’s “stick” was America’s military might, which in his day largely boiled down to the U.S. Navy, which he had enlarged and modernized. To demonstrate to a potential adversary that he was prepared to use these weapons, Roosevelt sent the fleet around the world in a massive show of force. However, he took care to couch the expedition in soothing rhetoric. He even ordered the battleships to be painted white to create the impression that they were angels of mercy rather than instruments of power. The combination proved effective. America’s global influence increased dramatically during his presidency even though few shots were fired.

The “sticks” that Janet Yellen is supposedly ready to employ are interest rate increases that are needed to help normalize the economy, fight inflation, and to stockpile ammunition to combat the next recession. Yet, in the last decade interest rates have essentially been fixed at zero. In fact, since the end of 2008 the Fed has raised rates a grand total of once…last December, by just one quarter of a percent. But what they have lacked in action they have more than made up for with torrents of talk. As a result of this “Loud Talk Policy,” American economic prestige in the 21st Century has fallen faster than it rose in the Roosevelt presidency.

Ever since the Fed finally wound down its quantitative easing programs back in 2014, the big question became when it would “normalize” interest rates, bringing them back to the three to four per cent levels that had been in place for much of the past century. Over that time, the Fed has issued countless statements, both officially and unofficially, that discussed why, when, and how fast it will raise interest rates. Never before have so many words been spilled and parsed over a policy development that never had any chance of coming to fruition.

The simple truth, I believe, is that the Fed can’t raise interest rates because its previous use of massive monetary stimulus to keep the country out of recession has created an economy that is hopelessly dependent on overly accommodating policy just to tread water. An economy is a physical thing. If it inflates too much, it must contract for balance and health to be restored. The Fed has committed itself to prevent that.

When the dotcom bubble crashed in the late 1990’s, the Fed and the Federal government inflated a much bigger bubble in housing to replace it. That produced some superficially good years, but the party couldn’t last forever. When that larger bubble popped in 2008, the government promptly blew up an even larger bubble in bonds, stocks, and real estate simultaneously to replace it. After six years and many trillions of dollars of purchases of treasury and mortgage-backed bonds (through its bailout and quantitative easing programs), the Fed has brought long term bond yields down to almost nothing, which has helped juice corporate profits, encouraged consumer borrowing, and re-ignited another increase in home prices.

Since there has been historically low growth in productivity and business investment over the past eight years, these rising asset prices appear to be the only pillars that support our otherwise anemic economy. The Fed must know that any significant increases in interest rates could knock out these pillars, toppling the phony recovery, and perhaps bringing on another recession that it would be hard-pressed to stop. I believe the Fed is much more aware than the typical Wall Street economists that the economy, as currently constituted, would have a difficult time handling interest rates that are even within shouting distance of normal.

But the difficult part for them is that they can never really admit that they find themselves in this trap. The Federal Reserve is now the country’s primary economic cheerleader. Given how much weight the public ascribes to every utterance of the Fed, to admit that the economy is weak would be to create a self-fulfilling prophecy. So instead of keeping silent and acting decisively as TR would have done, the Fed talks in circles and does nothing. They talk over one another, sometimes saying the same thing, sometimes appearing to pull in opposite directions. Sometimes they just talk while saying nothing at all.

Yesterday’s Fed statement is just the latest in a seemingly endless string of announcements that are meant to convey a sense of optimism and a feeling that some action is getting closer, even though nothing is actually likely to happen. When the statement was issued, Wall Street expressed little concern that the Fed had done nothing for the fifth consecutive meeting, but took immediate notice that the Fed had concluded that “risks to the economy had diminished.” To many, this meant that the next increase in rates could come as soon as the next meeting in September. Yet they have been saying versions of this for the past two years, and it resulted in one lone December rate hike, which was followed by the biggest January stock market rout in more than a century. (Ouch, Matt Phillips, Melvin Backman,1/20/16)

There are any number of economic or political developments that could occur in the next six weeks that could easily provide the Fed with yet another convenient excuse not to hike, without having to admit the real reason for its inaction. Last time it was Brexit. Before that, it was a weak jobs report. Before that, it was market chaos in China. The bar keeps getting lower and they will always find something. Unfortunately, the media talking heads and the Wall Street mutual admiration society keep enabling them to continue the pantomime.

But the show can not go on forever. There is no way to know when a little dog might pull back the curtain and reveal the truth behind the illusion. Should that happen, the absence of a stick will prove to be a huge problem for the entire nation.