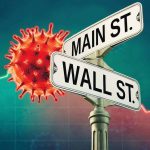 While most people generally understand that the stock market and the economy do not move in lock step, there is still an underlying belief that a strong market reflects a strong economy. But according to that logic, our current economy must be historically strong. If this strikes you as strange, given that we are in the midst of a destabilizing and polarizing pandemic, and a period of political risk that threatens the foundations of the Republic, that’s just because you don’t understand how the fundamental relationship between the stock market and the economy has changed. Believe it or not, strength on Wall Street is now driven by weakness in the broader economy.

Perhaps the most reliable metric for stock valuations is the Cyclically Adjusted Price to Earnings (CAPE) Ratio, which compares share prices to average earnings over a 10-year period, thereby smoothing out short term conditions. An August 6th Fortune article pointed out that CAPE ratios (which were 31.1 then, and have since moved up to 32.65) have only been as high or higher on three occasions over the past 132 years of available data: in 1929 right before the Great Depression, in 1999 right before the dotcom crash, and then briefly in September of 2018. And while we now know that the optimisms that fueled those prior spikes were largely, if not totally, illusory, at least it made some sense that stocks were rallying. (It’s also worth noting that stocks crashed in the immediate aftermath of those spikes). But where’s the optimism that’s fueling the markets now? Sure, Donald Trump may be wildly waving the pom poms, but no serious economist or investor thinks the economy is poised for greatness. Instead, this rally is all about the printing press.

With the Fed now delivering more stimulus than ever, and promising to keep interest rates at zero for as far as the eye can see, many attribute the surprising rally to a “never fight the Fed” bias, which has banished investor fears through the assumption that the Fed will vanquish every dip with even more stimulus. The low rates also “push” investors into stocks because they nearly eliminate the returns available through fixed income. But these forces, which have been with us, off and on, for the past 20 years, don’t fully explain why the current market is so strong. The Covid pandemic has actually created conditions whereby what hurts the economy and Main Street businesses actually helps the S&P 500.

Fed stimulus is particularly helpful to very large publicly traded companies who can borrow by issuing bonds to the public market. Thus, major companies, mostly those that are publicly traded, can actually take advantage of the Fed’s activism in real time. In contrast, smaller companies typically rely on traditional bank loans, which are often riskier than alternative uses of bank capital. As a result, small businesses are routinely denied credit, or face much higher interest rates, than do public bond issuers.

Low rates also allow large publicly traded companies to refinance their existing higher cost debt with lower rates, thereby increasing their earnings by lowering their interest expense. This results in the market assigning a higher price-earnings multiple to those enhanced earnings. So, the impact of lower rates delivers a double benefit to these companies both in terms of enhanced earnings and higher valuations.

But private companies, that collectively employ many more people than large public companies, get only modest benefits from ultra-low rates. Smaller businesses, that rely far more on sales revenue than capital markets to meet their funding needs, have seen sales plummet due to forced lockdowns, consumer austerity, worker shortages, and supply disruptions. They can’t turn to Wall Street smoke and mirrors to make up for the shortfall.

In addition, large companies are much better equipped to survive the Covid lockdowns, through greater ability to move business online and to allow employees to work from home. The best performing companies, like Amazon or Netflix, have online commerce as their core of their business model. These companies may actually benefit from decreased competition from small businesses that can’t transition as effectively. In this environment it should not be surprising that as of July 31 the S&P 500’s 10 biggest companies by index weight compromise nearly 29% of total market capitalization of the index, the highest level in nearly 40 years. (B. Winck, Business Insider, 8/10/20) As a result, the performance of those companies has a big impact on the market as a whole.

As the “Main Street” economy continues to languish, the Fed will continue the funding available for large business to borrow cheaply even while the pain for small business persists. This means that a bad economy is good for the stock market. Main Street’s pain is Wall Street’s gain.

But to expect that a Main Street recovery will soon take hold to change this dynamic is to completely ignore reality. Those who point to the remarkably strong July home sales numbers as a sign for optimism should think twice. A sober reading of the data suggests that the sales were largely fueled by people abandoning urban areas to buy in the suburbs. If so, the sales do not indicate economic health, but growing fear.

Coronavirus and its attendant economic stagnation are likely to be with us for years to come. Even if a vaccine is found in the next year or so, which is the most optimistic timetable, the damage to the travel, entertainment, fitness and food service industries may be beyond repair. How long will it take for people to once again feel comfortable in large groups? The fear will linger long after the real danger is gone.

Cultural changes that have already taken hold may mean that office towers, retail chains, and theaters may never recover. People and companies are becoming more comfortable with working from home, shopping online, and avoiding crowds. According to an article on Bloomberg on August 23, Goldman Sachs now anticipates that almost a quarter of the 22 million temporary layoffs that began with the first shutdown in March will become permanent. Some 2 million of those individuals could remain unemployed well into 2021. But these near-term problems may be just the beginning.

Many public sector workers across the country have made it clear that they will not return to work unless there is absolutely no danger from Coronavirus. If those demands seem ridiculous, it’s only because you fail to grasp the new idea about work itself. There are those who seem to now believe that an economy can function without work as long as the government is there to foot the bill. The process of producing goods and services has become so remote to most Americans that people don’t understand that something must be produced before it can be consumed, and that production isn’t always easy. This feeling is evident in the rise of concepts such as Universal Basic Income, extended unemployment benefits that pay more than the median wage, and Modern Monetary Theory, which suggests that there is no downside to unlimited money printing.

The trillions that Washington has already spent to help shield people from the ravages of government mandated lockdowns will be very hard to withdraw once people have come to rely on them. In his first interview since accepting the Democratic presidential nomination, Joe Biden conceded that he would completely shut down the economy again if Covid “was not brought under control.” Of course, he failed to define what “under control” really meant. No doubt it will mean whatever serves his political interest, which seems to be an effort to place government at the center of every facet of life.

It’s not just the possibility of more shutdowns that should be spooking investors. If the Democrats do take over in November, it’s likely that businesses could contend with corporate tax hikes (not only at the corporate level, but also for shareholders through higher taxes on dividends and capital gains), a raft of new environmental mandates, new rules on higher wages and benefits, and increasingly absurd and unworkable diversity and equity requirements that could make compliance and legal costs soar and productivity plummet.

But none of this has dented share prices. In fact, even as more and more American cities succumb to nightly rioting and paralysis, Citigroup has raised its year-end target for the S&P 500 index to 3,300 from 2,900. Ignoring all the bad news, Citi credited the upgrade to the “unbridled” Federal Reserve monetary easing, negative real rates, and its belief that the Fed will do “whatever it takes to prevent U.S. stocks declining by teen-like percentages.” (C. Mullen, Bloomberg, 8/24/20)

Recently Deutsche Bank came to a similar conclusion, suggesting that in order to make up for the stimulatory “insufficiency” of zero percent interest rates, the Fed’s balance sheet would need to expand by an “additional $12 Trillion” in the near term. (D. Rabouin, Axios, 7/27/20) To put that into perspective, the Fed’s balance sheet expanded by less than $4 trillion as a result of the four years of quantitative easing of 2009-2013. So far in 2020, the Fed has created almost $3 trillion in new money. But Deutsche Bank thinks the Fed will need to pump in 4 times that amount in the near-term just to keep the economy afloat.

As if there were any room left to doubt that the Fed is about to rush further into uncharted stimulus territory, Fed Chairman Jerome Powell announced last week that the Central Bank will no longer raise interest rates pre-emptively to head off higher inflation. This is really a distinction without a difference as the Fed has no intention of raising rates anytime in the foreseeable future. But this does give it cover to do nothing if inflation does show up in earnest.

As Congress and the President have proven to be absolutely incapable and uninterested in making the difficult economic policy decisions, they have found it much easier to ask the Fed to bail them out with its printing press. Last month, Joe Biden and Congressional Democrats called for changes in the Federal Reserve’s Charter that would require the bank to “aggressively target persistent racial gaps in jobs, wages, and wealth.” How it could possibly accomplish those goals given its limited tool set was left unsaid, but you can bet it will involve printing more money.

So, we have been handed a map of what may be expected over the next few years. The government will attempt to replace an imploded economy with an inflated money supply. This strategy has never worked in the past and it won’t work now. While the dollar has survived similar assaults on its strength before, it has never faced a test of this magnitude. Dollar weakness in recent months have many in the mainstream finally convinced that a reckoning is at hand. Buckle up.

Receive all of Peter Schiff’s economic commentaries delivered to your email inbox every Monday with EURO PACIFIC WEEKLY DIGEST.