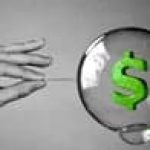 On December 3, 2014, a contributed article by Peter Schiff, CEO of Euro Pacific Capital, and author of The Real Crash – America’s Coming Bankruptcy, ran in the Washington Times. The piece sheds important light on how the Federal Reserve’s attitude regarding sub 2% inflation has changed significantly over the years. He makes the case that the Fed’s concern over low inflation has far less to do with the health of the overall economy than it does with the maintenance of the asset bubbles that the Fed has inflated to create the illusion of economic health. Feel free to excerpt sections for your coverage or link to the article on the Washington Times website.

Recent statements by Federal Reserve officials would lead just about anyone to believe that one of the bank’s central missions has always been to guard against the lurking threat of deflation. They warn that since official inflation has remained below the Fed’s 2 percent target for almost two years, the country is liable to fall into a stagnant morass unless the Fed acts boldly to hit its target. It may surprise many that this view is strictly a 21st-century development. The fear (some would say paranoia) regarding sub-2 percent inflation was nowhere in evidence in the past, even when inflation was lower than it is today.

The average headline inflation index (which includes food and energy) in the United States has increased about 1.5 percent since 2013 (this is tabulated based on the many changes in the Consumer Price Index over the past 20 years that have tended to produce lower inflation statistics). In the 70 years since the end of World War II, there was only one similar period, the seven-year stretch from 1959 to 1965 when headline inflation averaged a skimpy 1.26 percent. Contemporary economists would surely assume that during that time the Fed would have broken out the big guns to push inflation back up over 2 percent. In fact, the opposite was true.

In 1961, when inflation came in at just 1.07 percent, Fed Chairman William McChesney Martin (who was hardly considered hawkish at the time) began a campaign of consistent rate hikes that lasted five full years, from an average of 1.96 percent in 1961 to 5.1 percent for all of 1966. He continued the hikes even though inflation didn’t move above 1.5 percent, and unemployment didn’t fall below 5 percent, until 1965. The biggest increase in the cycle came in 1962 when the Fed jacked rates by 75 basis points (during a year when inflation was below 1.2 percent). Incredibly, Martin and the Fed did this at a time when unemployment (which averaged 6.15 percent in 1961 and 1962) was 36 percent higher than it had been during the prior 10 years (averaging 4.5 percent from 1951 to 1960). To use a 21st-century response, modern economists would say, “What’s up with that?”

One can only imagine what Ben S. Bernanke or Janet Yellen would have done in 1962. During the two-year period of 1961 and 1962, the average unemployment rate was about what it is today. Back then, though, the Fed funds rate was about 120 basis points above inflation (today it is more than 140 basis points below the rate of inflation). Rates above inflation are thought to retard growth, while negative rates are thought to stimulate. Could anyone doubt, based on the policies over the past decade, that Mr. Bernanke or Ms. Yellen would have immediately dropped rates to zero and unleashed quantitative easing? To use another modern rejoinder, it would have been a “no brainer.”

However, Martin went in the exact opposite direction. The Paul Krugmans of the world would have predicted that raising rates in the face of persistent disinflation and high unemployment would have driven the economy into recession. But guess what? That’s exactly what didn’t happen.

Gross domestic product in 1962 came in at 6.1 percent over the full year, more than 3 percentage points above the 1961 rate. Real GDP growth in the five-year period from 1962 to 1966 (when the Fed raised rates every year) averaged 5.9 percent (and never fell below 4.4 percent), one of the best streaks in modern memory. In 1965 and 1966, Fed funds averaged 230 basis points above the rate of inflation, and still real GDP came in at an average of 6.5 percent. The difference between the economy then and now could not be any more dramatic. These are not just numbers from another era; they are numbers from another planet. What explains the difference?

Back in the 20th century, the Fed did not consider inflation below 2 percent to be a problem, because it wasn’t. The truth is that when it comes to inflation, the lower the better, no matter how low that rate is. Back in the early ’60s, the Fed was worried that if it did not act preemptively to contain inflation, that it would accelerate, maybe even rise above 2 percent, which would be a real threat to economic growth. That was because at the time the economy was strong and the stock market was booming. Today, most economists believe the economy is also strong, and the stock market gains over the past five years have been far larger than those that concerned Martin. But he wanted to take away the punch bowl before the party got too rowdy. The new breed of banker seems never to want anyone to sober up.

If low inflation was not a problem for the economy in the early 1960s, why does it represent such an existential threat today? The answer is that it doesn’t. Low inflation, or even deflation, is not a threat to the economy but to the asset bubbles that the Fed has inflated in order to create the illusion of economic growth. Without the Fed creating inflation, the bubbles will burst and the government will be forced to deal with its insolvency.

Given that Wall Street economists have a vested interest in downplaying concerns about asset bubbles, it is understandable that the big financial firms have failed to point out the Fed’s historic response to low inflation. It is somewhat more troubling to see how the media have completely ignored the past in passing judgment on how the Fed should act today.