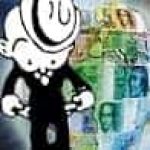 In an article in the UK’s Telegraph on October 10, veteran economic correspondent Ambrose Evans-Pritchard laid bare the essential truth of the nearly universal current embrace of inflation as an economic panacea. While politicians, CEOs and economists talk about demand stimulus and the avoidance of a deflationary trap, Evans-Pritchard reminds us that inflation is all, and always, about debt management.

Every year the levels of government debt as a percentage of GDP, for both emerging market and developed economies, continue to go higher and higher. As the ratios push out into uncharted territories, particularly in Europe’s southern tier, the ability to “inflate away” debt through monetization remains the only means available to postpone default. Evans-Pritchard quotes a Bank of America analyst as saying that even “low inflation” (not to mention actual deflation) is the “biggest threat to the dynamics of public debt.” IMF Managing Director Christine Lagarde ramped up the rhetoric further when she recently told the Washington Press Club that “deflation is the ogre that must be fought decisively.” In other words, governments need inflation to remain viable. It’s the drug they just can’t do without.

But as this simple truth is just too embarrassing to admit, politicians and central bankers (and their academic, journalistic, and financial apologists) have concocted a variety of tortured theories as to why inflation is not just good for overly indebted governments, but an essential economic good for all. In a propaganda victory that even Goebbels would envy, it is now widely accepted that purchasing power must decrease for an economy to grow.

Despite centuries of economic evidence to the contrary,they argue that if prices do not rise by at least 2% per year consumers will not spend, business will not hire, and economies will slip into an intractable deflationary death spiral. To prevent this, they recommend governments spend without raising taxes. Not only would such a move involve a direct stimulus by increased government spending, but the money printed by the central bank to finance the deficit will push up prices, which they argue is very healthy for the economy. As the Church Lady used to say, “How convenient.”

Offering voters something for nothing is the Holy Grail of politics. But as a matter of reality, voters should know that a free lunch always comes with a cost. This isn’t even economics, its physics.

Inflation does not reduce the nominal amount of one’s paycheck. But rising prices reduce the amount of goods and services it can buy. So when governments run deficits, workers will be stuck with the bill. Whether they pay though higher taxes or inflation, their standard of living will be diminished. The main difference is that workers know to blame government for higher taxes, which explains why politicians prefer inflation.

To give cover to this tendency, economists have come up with the bizarre concept that falling, or even stable, prices squelch demand and deter consumption. The idea is that if consumers know that something will cost less in the future (even if it’s just 2% less) they will defer their purchases indefinitely, perhaps waiting for the cost of their desired product or service to approach zero. They argue that this can push an economy into a deflationary spiral of falling prices and diminished demand which may be impossible to escape.

But this idea ignores the time value of a product or service (people will tend to pay more for something they can enjoy sooner rather than later) and the economic law that shows how demand goes up as the price falls. But common sense has absolutely nothing to do with the current practice of economics. Instead, the dominant argument is that inflation is needed to seed the economy with demand.

However, this argument is merely a smoke screen. The only thing that inflation can do is to help governments spend. Economies do just fine with low inflation. In fact during the late 19th century, in the Great Sag, the United States experienced sustained deflation while creating much faster economic growth than we have seen in the last few generations. As recently as during the early 1960s the U.S. experienced consistently low inflation (barely 2%) and strong economic growth based on government figures. But in their call for more inflation, modern economists tend to forget or downplay those periods.

But inflation is actually more economically harmful than taxation. By blurring the link between higher government spending and reduced purchasing power, the public is less likely to oppose government expansion. And therein lies the truth. Inflation is not needed to grow economies but to grow governments.

The problem is particularly acute in Europe where countries of radically different fiscal characteristics have been locked into a politically unworkable monetary union. On one side are countries like Italy, Spain, and France whose governments have been notorious for offering generous benefits for which they can’t pay. Before adopting the euro, these countries had currencies that were not known for their bankability. Germany, on the other hand, had built its reputation on balanced budgets and a strong Deutsche Mark. But given the strict monetary restrictions that were needed to grease the skids toward union, the European Central Bank has not been able to create inflation as freely as the U.S. or Japan. As a result, the debt crisis there has been placed in particularly sharp focus, as the problem is perceived to be much larger than in other developed countries that can print at will.

The calls for more inflation in Europe should be raising hackles on the streets of the Continent. But Keynesian economists have provided cover for politicians for years, and true to form, they have again risen to the occasion. While it is understandable that governments are motivated to champion inflation, it is harder to see why professional economists are similarly inspired. Perhaps they believe modern economics has the magic ability to create something from nothing. But the idea that a properly applied macroeconomic formula can somehow circumvent the laws of supply and demand is ludicrous and dangerous.

Of course, the idea that governments can hold inflation to just 2% per annum is preposterous. Once it breaches that level, governments will be powerless to contain it. The endgame will be hyperinflation. That is because escalating levels of debt will prevent them from raising interest rates high enough to break the inflationary spiral. The last time that inflation really got out of hand was back in the early 1980s when a boldly inspired Federal Reserve was able to put the genie back in the bottle by hiking interest rates all the way up to 18%. The economy not only survived that harsh medicine, but it prospered as a result. Does anyone seriously believe that we could survive even a quarter of that dosage today?

Since the central banks are now destined to forever remain behind the inflation curve, it will continue to accelerate until the real threat of hyperinflation looms much larger than did the contrived threat of deflation.