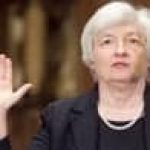 The current stock market is earning a deserved reputation as being coated in Teflon. Bad or disappointing news just doesn’t appear to stick, and has done nothing to slow the market’s upward trajectory. Bad news is good and good news is good news. But where does this all end? A minority of investors have begun to wonder whether negative geo-political risks, embodied in the steely-eyed stare of Vladimir Putin, are exerting more influence on the market than the sunny smiles of Janet Yellen. Just going by the market numbers, Yellen remains firmly in the driver’s seat. Thus far this year, the S&P 500 is up more than 8% and there has been little evidence that investors fear a pull back.

But despite the surface enthusiasm, the hard-core data provides little to celebrate. At the end of last year, economic confidence for a strong 2014 was nearly universal. But so far this year the International Monetary Fund (IMF) has cut its forecast for US GDP growth from 2% to 1.7% It also cut its global forecast from 3.6% to 3.4%. Japan, which has been a key piston in the global economy, has seen its GDP collapse in the second quarter to an annualized -6.8%. Its outlook for the year doesn’t look good either. Italy has gone back into recession, and the list goes on.

Last week, it was reported that the EU’s three largest economies had fallen into negative growth. Germany, which was recently surpassed by China as the world’s largest exporter, saw its quarterly GDP slip to a negative 0.2%. The quarterly GDP of France again saw no growth and that of Italy to negative 0.2%. Despite the quarterly increase of 3.2% in the GDP of Great Britain, the EU’s fourth economy, EU growth has stalled.

The seriousness of a recession in the EU and its effect on an already unhealthy-looking world economy should not be underestimated. The U.S. and EU transacted some $650 billion of mutual trade in 2013 based on U.S. Census Bureau figures. According to the European Commission, “The EU and the U.S. economies account together for about half the entire world GDP and for nearly a third of world trade flows.” The geo-political side of the equation is perhaps even worse.

In Iraq, an apparent tactical miracle was achieved in preventing the spread of the disgusting genocide of Christians. However, in politics such miracles are rare. The key question remains as to what key points the U.S. Administration may have yielded covertly in its nuclear negotiations with Iran. What bargaining points were given in return for Iran’s backing of U.S. efforts to sack Nouri al-Maliki? In time, Americans and international financial markets may see the possibly frightening true costs of any such Obama deal that covertly may have increased Iran’s chances of obtaining a nuclear weapon. With Russian help it may even become deliverable.

The Ukraine crisis is a child of Crimea. The Crimea was every bit as much a vital Russian interest as was Cuba to the U.S. in the 1960s. President Kennedy could not climb down even if it meant nuclear war. In the end the Russians had to back down. This time around it was Russia that could not climb down over the Crimea, even if it meant war. It was Obama that needed the “off-ramp.” But the sanctions that Obama has used as smoke screen to cover this withdrawal have created a new series of problems.

The sanctions also have the potential to widen the gap between U.S. and European interests. The EU transacted some $326 billion of trade with Russia in 2013. According to the Bureau of Census, U.S. trade with Russia amounted to $38 billion, or only some 11.7 % of that of the EU. Clearly, the EU and especially Germany have far more to lose than the U.S. Consequently, Obama’s sanctions exposed important latent political differences and potentially damaging military splits within NATO.

Putin now implies a return of the damaging Cold War and, with it, threatens the freedom of other East European nations recently freed from the Russian yolk. Likely, this will add significantly to NATO defense budgets at significant cost to members’ economies. The sanctions have also re-energized Putin’s objectives to partner with China to trade away from the dollar.

Furthermore, the advent of winter likely will favor Russia and its potential energy stranglehold on non-British and Norwegian Europeans.

Unlike Iraq, the Ukraine threatens major power conflict which could hurt badly the EU, the dollar, and the slowing global economy. Meanwhile, thin financial markets, fed by central banks with cheap easy money, continue to climb. Investors may ponder for how long.

But despite the increasing risks of war, recession and trade disruption, the U.S. stock markets continue to climb, especially on low summer trading volume. 2014 has also extended the extraordinarily low volatility that has been in place since the end of 2012. The only consistent answer to explain this result is that the markets only really care about one thing: Continued liquidity support from the Federal Reserve. On that front, there is very little for investors to fear. Yellen has studiously avoided any statement that would indicate policy reversal from the Fed. On the contrary, her statements continually soften the line that would cause the Fed to begin tightening policy.

But I believe that markets are getting far too complacent on how this Fed largesse and Russian currency strategy could negatively impact the U.S. dollar. That is where the real risks lie.

Order a copy of Peter Schiff’s updated illustrated economic parable he co-wrote with his brother Andrew, How an Economy Grows and Why It Crashes – Collector’s Edition, and save yourself 32%!