This Is Not a Printing Press 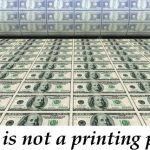 The commentary below is from Peter Schiff, Chief Global Strategist of Euro Pacific Capital, a division of A.G.P. / Alliance Global Partners, a Registered Investment Advisor and a full-service broker/dealer. He is the author of the The Real Crash: America’s Coming Bankruptcy. Please feel free to excerpt what you like with proper attribution. To speak with Peter, please contact Andrew Schiff at 203-662-9700 ex. 135 or aschiff@europac.net. 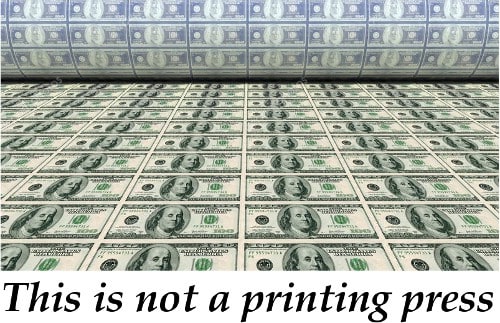 Rene Magritte’s 1929 painting “The Treachery of Images,” depicts a tobacco pipe with a caption that reads “Ceci n’est pas une pipe,” (French for “This is not a pipe”). Everyone who has taken a course in modern art knows that Magritte’s exercise in contradiction was meant to draw a distinction between a real thing and a representation of that thing. Perhaps we should send Federal Reserve Chairman Jerome Powell a beret and an easel as he is attempting a similarly surrealistic take on monetary policy.

Early last week, the Chairman announced a new, as yet unnamed, Fed program through which the bank will now buy regular amounts of short-term U.S. government debt. Seeking to counter the rumblings that a new form of quantitative easing would be seen as an admission that the economy may be in trouble, Chairman Powell asserted during the annual meeting of NABE on October 8, “This is not QE. In no sense is this QE”. In other words, “Ceci n’est pas QE.”

On Friday, the New York Fed put some meat on the bone by detailing that the program will buy $60 billion per month of Treasury Bills, at least through the second quarter of next year. (R. Miller & C. Condon, Bloomberg) In addition, at least through January 2020, the Fed will continue with $75 billion in overnight repurchases and $35 billion in term repurchases twice per week. (N. Timiraos & P. Kiernan, Dow Jones Newswire) As a result, it is estimated that the Fed’s balance sheet will reach roughly $4.2-$4.3 trillion some time in Q2 2020. Of course, since the actual size of the purchases required to keep interest rates from rising could be much larger, the Fed’s balance sheet could be significantly larger as well.

The Fed even put out a Frequently Asked Questions page last week that among other things highlighted how the current moves differ from the original version of QE in 2008. It stresses that whereas the old version of QE was designed to spur economic growth in a sluggish economy, the current moves are simply designed to patch leaky financial pipes that are very much removed from the real economy. A statement on the FAQ page reads, “These operations have no material implications for the stance of monetary policy,” and should not have “any meaningful effects” on household and business spending or the overall level of economic activity. Instead, the Fed just wants to make sure there is enough cash sloshing around the system – because lately there hasn’t been.

As it was originally defined just a few short years ago, QE was the attempt by central banks to buy and hold government debt in an effort to pull down interest rates and inject liquidity into stressed financial markets. Okay, check and check. The only difference between then and now is that in 2008-2014 the Fed targeted the longer-dated end of the bond market, and this time it is targeting the shorter end…at least for now. But bond maturity length never figured much into the definition anyway, so that doesn’t really seem to matter.

Another distinction that Powell makes is that the current program is more modest in scope than the full-blown QE programs of 2009-2014, which added more than $4 trillion to the Fed’s balance sheet, according to data from the St. Louis Fed, (the vast majority of which it still holds to this day). And while it’s true that the $180 billion or so that the Fed has pumped into the markets over the last month is just a spit in the bucket compared to what it had amassed in the early part of this decade, please remember that the Fed has just started…give it time! $180 billion in one month is actually a much faster pace than what was seen at the height of the QE era (which topped out at $85 billion per month).

Should anyone really expect that the new program will end in the middle of next year as the Fed now suggests? It has never fully ended any of its prior stimulus plans, why would this one be any different? In fact, thanks to the Fed, the U.S. economy will be even more heavily indebted in eight months than it is now. So the Fed will be forced to buy even more debt to keep interest rates from rising in an economy even more vulnerable to higher rates than it is today. Like any drug habit, the more drugs you consume today, the more you will have to consume tomorrow to achieve the desired effect.

If we can agree that it makes no difference what we call the program, it is nevertheless important to focus on the differences between QE then and QE now. Back in 2009, the program was all about reliquifying the long bond market that had been decimated by billions of dollars of worthless subprime bonds. But a decade later, the home mortgage market is relatively calm, at least for now. Long-term interest rates are already rock bottom, and mortgage delinquencies are not currently causing panic in the banking system. Today, problems are popping up in a very different place, the very short-end of the bond market, particularly in the overnight “repos” where banks lend spare cash to one another on a very short-term basis.

As it turns out, the Fed’s $50 billion per month of bond sales, which began early in 2018 and ended in Second Quarter of this year, drained liquidity from the overnight market at the same time increased government borrowing was sucking up all available cash. Last year’s tax cuts, combined with increased Federal spending, pushed this year’s deficit past $1 trillion for the first time since 2012. (G. Heeb, Markets Insider, 9/14/19) Deficits are currently expected to stay north of $1 trillion per year for the foreseeable future. That means more new government bonds than expected are likely to hit the market.

Contrary to his campaign promise, President Trump has actually shortened the maturity of the national debt. (US Govt. Finance: Debt, Yardeni Research, Inc., 10/10/19) Shorter maturities means that more debt will need to be refinanced each month. Banks have dutifully bought those bonds, as they are often required to do by capitalization laws that were put in place since the Crisis of 2008. But this has not left enough cash to keep the overnight market well-lubricated.

This problem erupted into broad daylight just a few weeks ago, when yields on overnight bonds skyrocketed to 10% or more. Rates that high in an overlooked, but vital, part of the financial system could have caused the economy to seize up, so the Fed intervened with all guns blazing. It bought approximately $53 billion of overnight loans in just the first day of the crisis.

At that point, most market observers believed that the problem was caused by a confluence of temporary events that would last just one day, or maybe a week. But those hopes quickly faded, and we have been left with a crisis that now appears permanent. In light of this, it is not surprising that the Fed expanded its intervention into the short-end of the Treasury market. But don’t expect the problems to end there. The debt crisis is like a cancer that I believe will continue to spread. The Fed is out of miracle cures. In fact, it never had any.

This all reminds me of when Fed Chairman Ben Bernanke first introduced the QE program in 2009, stressing that that it did not constitute “debt monetization” (the situation where a government buys its own debt) because QE was “temporary” and the bonds that the Fed was buying in an emergency would be sold back to the market once the crisis abated. (Testimony before U.S. House Budget Committee, 6/3/09) At the time, I predicted, when virtually no one else on Wall Street did, that the Fed would never be able to sell those assets back into the market. It turns out, the Fed was only able to sell less than 25% of what it had bought before it encountered a crisis that forced it to scrap the whole process.

As I have said many, many times , quantitative easing is a monetary Roach Motel: Once central bankers check in, they can never check out. For now, Chairman Powell is occupying a different room in this particular motel than had his predecessors. But rest assured, not only will he occupy that room, but I expect he will also be expanding into many more. None of the rooms will have a good view and all will have dirty linen.

The real question is when investors will get wind of the stench? The Fed has been successful in fooling the markets regarding the temporary nature of zero-percent interest rates, the efficacy of QE, and its ability to normalize rates and shrink its balance sheet. Had the markets not been fooled, the program would have produced a much different result. Its “success” was purely a function of the belief that the policy was temporary and reversible. The realization that it is neither could cause a flight from the dollar and Treasuries that could usher in a financial crisis far worse than what was experienced in 2008.

Best Selling author Peter Schiff is the Chief Global Strategist of Euro Pacific Capital, a division of A.G.P. / Alliance Global Partners, a Registered Investment Advisor and a full-service broker/dealer.. His podcasts are available on The Peter Schiff Channel on YouTube.