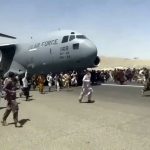 In the 50 years since Richard Nixon officially severed the dollar’s link to gold, many have claimed that the greenback’s strength rests primarily on America’s unchallenged power and prestige around the world. As the situation in Afghanistan moves from embarrassment to tragedy, we are witnessing the rapid evaporation of the remnants of American prestige.

These developments are likely to further decentralize the dollar’s role in global finance and increase the chances that the currency will experience substantial declines in the years to come.

While the wisdom maintaining a 20-year U.S. military presence in Afghanistan, can be honestly debated, it seems beyond doubt that our government’s strategic assessment of the situation in Afghanistan, and the timing and execution of the evacuation, have been epic, historic, failures. The picture that has emerged paints America not just as a paper tiger, but one that is also deaf and blind.

The pictures themselves tell the story. Those who put their lives on the line to advance American interests have been left standing outside the Kabul airport in flooded sewage trenches hemmed in by razor wire. There can be little hope that those we leave behind will escape the vengeance of the religious fanatics who have toppled the world’s largest military. In Washington, a doddering President comes to the podium and mumbles statements so obviously contradicted by the images we all see, that even the fawning, left-leaning press corps can’t pretend to swallow them.

In frantic calls under the auspices of the G-7 (the seven-nation bloc of the world’s leading industrial democracies) and NATO, America’s closest allies have publicly expressed their disbelief that Biden could so callously abandon his allies to pursue a domestic political agenda. The Left had accused Trump of looking to destroy NATO. But Biden may be able to accomplish that goal far quicker and more completely than Trump ever could.

It’s clear to everyone that Biden’s self-imposed August 31st evacuation deadline arose because the President feared that an attack on U.S. forces on the ground would blemish his image as a peacemaker. That attack came on Thursday, killing 13 U.S. servicemen and up to 80 Afghan civilians.  By not committing the resources needed to execute a more robust and orderly withdrawal, Biden is prepared sacrifice the lives of Americans and our Allies to perpetuate a fantasy that he had planned for all contingencies.

The feckless American performance has inspired allies in Europe to openly ask for a new strategic framework that removes America as the primary security guarantor. More ominously China has used the episode to warn the Taiwanese that when the chips are down, America’s weakness on display in Kabul will be repeated in the South China Sea.

While I never supported an extended ground mission in Afghanistan, it doesn’t mean that the visible reminders of America’s dysfunction are not a game changer on the global stage. And while some may rightly argue that it’s far past time for America to relinquish the role of global policeman, it doesn’t change the fact that America’s retreat will create a power vacuum that our rivals will fill.

As China extends its influence throughout Asia and into the Pacific, the Middle East, and Africa, we can be sure that they will see themselves replacing the United States as the world’s dominant economic power. Given its power it is certain that China is uncomfortable with the advantages that the U.S. receives through the dollar’s global reserve status..

If a company in Chile wants to do business with a company in Australia, they must buy dollars to effectuate the transactions. If the Swedes want to buy oil from the Saudis they need dollars to do it. The weight of all this dollar denominated commerce creates a continuous demand that helps support the dollar no matter how much it is abused by Washington’s deficit spending and money creation. This has given America a license to steal.

Contrary to the asinine statements that come from economic professors and financial journalists, a weak currency is not a benefit because it allows countries to undercut rivals on price. I take the more basic, and apparently controversial, argument that being rich is generally better than being poor. A strong currency means that those who hold it have greater purchasing power.

The strength of the dollar has meant that Americans can afford to buy massive quantities of goods manufactured overseas. And since a very large portion of what we buy is imported, it means that we can find relatively low prices for all the things that we use daily. A significantly weaker dollar will reverse all of this and will diminish our living standards.

It’s sobering to think of how easily the Chinese could pull the rug out from under the dollar. China could sell just a portion of its multi trillion-dollar stash of U.S. Treasury bonds. Or it could mandate its trading partners transact in the RMB. Or it could look for strategic partners like Russia to organize commodity exchanges based in other currencies (a development that is already well underway).

If the dollar loses its global reserve status it will have to rise and fall on its own merits. On that score things could hardly be worse. The country is experiencing the largest debt explosion in our history, occurring simultaneously with the most dangerous outbreak of inflation since 1981. But unlike 1981, there is no will anywhere within 1,000 miles of Washington to do anything to contain these growing threats to the dollar’s fundamentals.

In 1981 Ronald Reagan and Paul Volcker combined to break the back of an inflation crisis that had been building for more than a decade. They did this through a combination of pro-business, supply side economic policies and extremely hawkish monetary policy. There is nothing like that even being proposed by either party today, let alone being actively considered by the big spending, negative real interest rate doves in the White House and at the Federal Reserve. The American government currently spends more than twice what it raises in taxes. It borrows the rest. Similarly private debt levels are at record levels across a variety of sectors.  Yet all the current administration can think of to get us out of the mess is to borrow and print more.

At some point the rest of the world will grow increasingly uncomfortable with storing their wealth in a currency that is continually created to pay the debts that Americans can’t pay themselves. And with America’s power and leadership waning, who would blame them if they decided to follow China into a new century.

In such a scenario were to transpire, big drops in the dollar will also make huge impacts on relative investment performance. American investors should prepare for the world to come, rather than be stranded like those unfortunate souls at the Kabul airport.

For in-depth analysis of this and other investment topics, subscribe to Peter Schiff’s Global Investor newsletter. CLICK HERE for your free subscription.

Receive all of Peter Schiff’s economic commentaries delivered to your email inbox every Monday with EURO PACIFIC WEEKLY DIGEST.