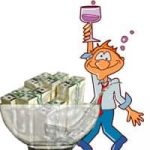 It is well known that I don’t think much of the ability of government officials to correctly forecast much of anything. Alan Greenspan and Ben Bernanke have made famously clueless predictions with respect to stock and housing bubbles, and rank and file Fed economists have consistently overestimated the strength of the economy ever since their forecasts became public in 2008 (see my previous article on the subject). But there is one former Fed and White House economist who has a slightly better track record…which is really not saying much. Over his public and private career, former Fed Governor and Bush-era White House Chief Economist Larry Lindsey actually got a few things right.

Back in the late 1990s, Lindsey was one of the few Fed governors to warn about a pending stock bubble, and to suggest that forecasts for future growth in corporate earnings were wildly optimistic. He also famously predicted that the cost of the 2003 Iraq invasion would greatly exceed the $50 billion promised by then Secretary of Defense Donald Rumsfeld, a dissent that ultimately cost him his White House position. (But even Lindsey’s $100-$200 billion forecast proved way too conservative – the final price of the invasion and occupation is expected to exceed $2 trillion).

Now Lindsey is speaking out again, and this time he is pointing to what he sees as a painfully obvious problem: That the Fed is creating new bubbles that no one seems willing to confront or even acknowledge. Interviewed by CNBC on June 8th on Squawk Box, Lindsey offered an unusually blunt assessment of the current state of the markets and the economy. To paraphrase:

“The public and the political class love to have everything going up. We had “Bubble #1” in the 1990s, “Bubble #2” in the 00s, and now we are in “Bubble #3.” It’s a lot of fun while it’s going up, but no one wants to be accused of ending the party early. But it’s the Fed’s job to take away the punch bowl before the party really gets going.”

To his credit, however, Lindsey sees how this is sowing the seeds for future pain, saying:

“The current Fed Funds rate is clearly too low, the only question is how we move it higher: Do we do it slowly, and start sooner, or do we wait until we are forced to, by the bond market or by events or statistics, in which case we would need to move more quickly. By far the lower risk approach would be to move slowly and gradually.”

In other words, he is virtually pleading for his former Fed colleagues to begin raising rates immediately. I would take Lindsey’s assertion one step further; the party really got going years ago and has been raging since September 2011, the last time the Dow corrected more than 10%. (That correction occurred at a time when the Fed had briefly ceased stimulating markets with quantitative easing.) Since then, the Dow has rallied by almost 58% without ever taking a breather. With such confidence, the party has long since passed into the realm of late night delirium.

As if to confirm that opinion, on June 8th the Associated Press published an extensive survey of 500 companies (using data supplied by S&P Capital IQ) that showed how corporate earnings have been inflated by gimmicky accounting. Public corporations, upon whose financial performance great sums may be gained or lost, are supposed to report earnings using standard GAAP (Generally Accepted Accounting Principles) methods. But much like government statisticians (see last month’s commentary on the dismissal of bad first quarter performance), corporate accountants may choose to focus instead on alternative versions of profits to make lemonade from lemons.

Using creative accounting bad performance can be explained away, moved forward, depreciated, offset, or otherwise erased. Given the enormity and complexity of corporate accounting, investors have deputized the analyst community to sniff out these shenanigans. Unfortunately, our deputies may have been napping on the job.

The AP found that 72% of the 500 companies had adjusted profits that were higher than net income in the first quarter of this year, and that the gap between those figures had widened to sixteen percent from nine percent five years ago. They also found that 21% of companies reported adjusted profits that were 50% more than net income, up from just 13% five years ago.

But with the fully spiked punch bowl still on the table, and the disco beat thumping on the speakers, investors have consistently looked past the smoke and mirrors and have accepted adjusted profits at face value. In a similar vein, they have looked past the distorting effect made by the huge wave of corporate share buybacks (financed on the back of six years of zero percent interest rates from the Fed). The buybacks have created the illusion of earnings per share growth even while revenues have stalled.

So kudos to Lindsey for pointing out the ugly truth. But I do not share his belief that the economy and the stock market can survive the slow, steady rate increases that he advocates. I believe that a very large portion of even our modest current growth is based on the “wealth effect” of rising stock, bond, and real estate prices that have only been made possible by zero percent rates in the first place. In my opinion, it is no coincidence that economic growth and stock market performance have stagnated since December 2014 when the Fed’s QE program came to an end (it has very little to do with either bad winter weather or the West Coast port closings).

Prior to that, the $80+ billion dollars per month that the Fed had been pumping into the economy had helped push up asset prices across the board. With QE gone, the only thing helping to keep them from falling, and the economy from an outright recession (which is technically a possibility for the first half of 2015), is zero percent interest rates. Given this, even modest increases in interest rates could be devastating. Lindsey’s gradual approach may be equally as dangerous as the rapid variety. But the quick hit has the virtue of bringing the inevitable pain forward quickly and dealing with it all at once. Call it the band-aid removal approach; it may seem brutal, but at least it’s direct, decisive and makes us deal with our problems now, rather than pushing them endlessly into the future.

The last attempt made by the Fed to raise rates gradually occurred after 2003-2004 when Alan Greenspan had attempted to withdraw the easy liquidity that he had supplied to the markets in the form of more than one years’ worth of 1% interest rates. But by raising rates in quarter point increments for the succeeding two years, Greenspan was unable to get in front of and contain the growing housing bubble, which burst a few years later and threatened to bring down the entire economy. In retrospect, Greenspan may have done us all a favor if he had moved more decisively.

Today, we face a similar but far more dangerous prospect. Whereas Greenspan kept rates at 1% for only a year, Bernanke and Yellen have kept them at zero for almost seven. We have pumped in massively more liquidity this time around, and our economy has become that much more addicted and unbalanced as a result. Arguably, the bubbles we have created (in stocks, bonds, student debt, auto loans, and real estate) in the years since rates were cut to zero in 2008 have been far larger than the stock and housing bubbles of the Greenspan era. When they pop, look out below. Unfortunately, the gradual approach did not save us last time (worse, it backfired by making the ensuing crisis that much worse), and I believe it won’t work this time.

In fact, the current bubbles are so large and fragile that air is already coming out with rates still locked at zero. However, unlike prior bubbles that pricked in response to Fed rate hikes, the current bubble may be the first to burst without a pin. It appears the Fed fears this and will do everything it can to avoid any possible stress. That is why Fed officials will talk about raising rates, but keep coming up with excuses why they can’t.

Lindsey will be right that the markets will eventually force the Fed to raise rates even more abruptly if it waits too long to raise them on its own. But he grossly underestimates the magnitude of the rise and the severity of the crisis when that happens. It won’t just be the end of a raging party, but the beginning of the worst economic hangover this nation has yet experienced.