Debt is No Salvation 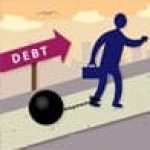 Posted by Peter Schiff on 06/13/2014 at 6:40 AM
Thus far 2014 has been a fertile year for really stupid economic ideas. But of all the half-baked doozies that have come down the pike (the perils of “lowflation,” Thomas Piketty’s claims about capitalism creating poverty, and President Obama’s “pay as you earn” solution to student debt), an idea hatched last week by CNBC’s reliably ridiculous Steve Liesman may in fact take the cake. In diagnosing the causes of the continued malaise in the U.S. economy he explained, “the problem is that consumers are not taking on enough debt.” And that “historically the U.S. economy has been built on consumer credit.” His conclusion: Consumers must be encouraged to borrow more money and spend it. Given that Liesman is CNBC’s senior economic reporter, I would hate to see the ideas the junior people come up with.Before I get into the historical amnesia needed to make such a statement, we first have to confront the question of causation. Just as most economists believe that falling prices cause recession, rather than the other way around, Liesman believes that economic growth is created when people tap into society’s savings in order to buy consumer goods that they could not otherwise afford. But consumption does not create growth. Increasing productive output allows for greater consumption. Something needs to be produced before it can be consumed.

But even allowing for this misunderstanding, consumer credit does little to increase consumption. All it accomplishes is to pull forward future consumption into the present (while generating a fee for the banker). This is like giving yourself a blood transfusion from your left arm to your right. Nothing is accomplished, except the possibility of spilling blood on the floor. But it’s not even that benign.
If, for instance, a consumer borrows to take a vacation, the debt will have to be repaid, with interest, from future earnings. This just means that rather than saving now (under-consuming) to pay in cash (which under normal circumstances would earn interest and defray the cost) for a vacation in the future, the consumer borrows to vacation now and pays for it in the future. But shifting consumption forward can only create the illusion of growth.

Unlike business credit that can be self-liquidating (businesses borrow to invest, thereby expanding capacity, increasing revenue, and gaining a better ability to repay the loan out of increased earnings), consumer credit does nothing to help borrowers repay. Why would a consumer expect it to be easier to pay for a vacation in the future that he can’t afford in the present? Especially when he is using credit to pay, which will add interest costs to the final bill. As a result,  consumer loans diminish future consumption more than current consumption is increased.

In fact, borrowing to consume is the worst use of society’s limited store of savings. As explained in my book, How an Economy Grows and Why it Crashes, savings leads to capital formation and investment, which grows productive capacity. When production grows, goods and services become more plentiful and affordable, thereby raising living standards. Consumer credit interferes with this process. Funds borrowed for consumption are not available for more productive uses. Since consumer credit reduces investment, it also reduces future production, which must also reduce future consumption.

Liesman is also mistaken that consumer credit has been the historic foundation of growth in the United States. It may surprise him to know that consumer credit was largely unknown until the second half of the 20th Century. Before that, people simply did not, or could not, buy things on credit. They tended to pay in cash (even for cars) or with the now quaint system of lay-a-way (which is essentially the opposite of consumer credit). Credit cards did not become ubiquitous until the 1970s. It was also much more common for Americans to save money for an uncertain future, the “rainy day,” that we were always being warned about. But savings rates now are only a fraction of where they had been for most of our history. Consumers now expect to borrow their way out of any crisis. Yet the American economy enjoyed some of its best years before consumer credit ever became an option.

What Liesman is really advocating is that consumers borrow money to buy things they cannot afford. What kind of economic advice is that? Especially now that one third of Americans have less than $1,000 saved for retirement; a statistic so shocking that even CNBC recently cited it as a cause for concern. Does he really think that these savings-short Americans should take on even more consumer debt? Does creating a nation of bankrupt seniors who are too broke to retire ever create a more prosperous society?

Contrary to Liesman’s asinine contention, it’s not consumer credit that built the U.S. economy but its opposite – savings! Under-consumption not excess-consumption is what made America great. By saving instead of spending, consumers provided society with the means to increase investment and production that led to rising living standards for all. Unfortunately, it’s consumer credit that is helping to destroy what savings once built.